It is because of its minerals that the Binntal began to develop as a tourist attraction. English visitors in particular discovered the valley and its minerals in the second half of the 19th century. The old bridle path through the Twingi Gorge was widened in 1864, and the Ofenhorn Hotel first opened its doors in 1883. In 1900 about 20 families in the Binntal were able to earn extra money from prospecting for minerals, by all accounts more than they could earn from farming, the traditional source of income.

The valley of hidden treasures

When we think of crystals, we usually think of clear rock quartz or mysterious smoky quartz. The Binntal contains these different quartz varieties in all different shapes and forms, along with a whole range of other minerals, many of which may be small in size but are often unusual in their form. To date, over 300 different mineral types have been found in the Binntal, of which around 150 were found in the world-famous mineral Lengenbach Quarry beyond Fäld. The Binntal is the type locality for about fifty minerals – meaning they were first identified in the valley.

Unlike the floral treasures and delightful landscapes which are immediately visible to anyone walking through the valley, the mineral world usually remains hidden to the average eye – under vegetation, scree and stone. The knowledge and experience of expert prospectors is needed to discover the mineral rarities. Why not take a minerals guided tour with a local expert and learn more about searching for crystals? 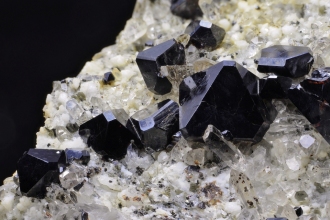 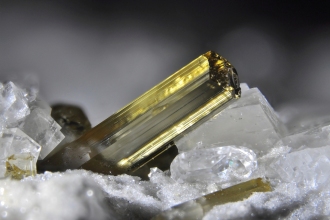 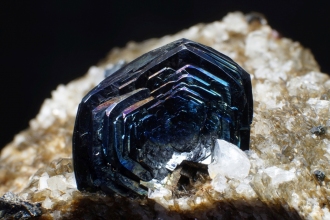 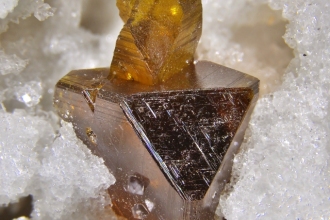 Lengenbach mineral quarry is one of the most important mineral localities in the world. You won't find large pieces of rock quartz or precious stones here, but you will find small – and rarer – minerals. Over 150 different types of mineral have been found at Lengenbach so far, and of these, 40 were identified for the first time.
Lengenbach is a small side valley of the Binntal, rising steeply above the hamlet of Fäld. At the bottom of the valley, the stream has exposed a special area of rock, a 300 m thick stratum of pure white dolomite marble. When this rock was deposited about 240 million years ago, ores of iron, lead, zinc and other metals formed. At Lengenbach, during the formation of the Alps, these ores were transformed at high temperatures, producing the many extremely rare and exotic minerals found there today.

Formed in druses and vents, these can be mainly found as small crystals only a few millimetres in length. There are also large amounts of golden yellow pyrite (fool's gold) and crystals of bright red arsenic sulphide (realgar), which are extremely striking and attractive in the white dolomite. Lengenbach became known as a place for finding exotic minerals 200 years ago – and has remained so to this day. The Lengenbach quarry is still being mined for research purposes.

Lengenbach for children and stone collectors

The extremely rare, tiny mineral specialities are perhaps of less interest to children and lovers of beautiful stones and minerals; they take more delight in the white dolomite with its sparkles of gold-yellow pyrite and other occasional minerals, which can be easily collected from the quarry spoil heap. This place has a magical attraction for children in particular. Pop a few francs in the 'Grubenkässli' (quarry cashbox) and help to ensure that minerals can continue to be mined in this unique place!

In 2017, an article entitled "Zwei Naturpärke, ein Pass mit Biwak und schöne Mineralien" (Two nature parks, a pass with a hut and beautiful minerals) was published in three languages (D, F, I) in "Schweizer Strahler", the magazine of the Swiss Association of Prospectors, Mineral and Fossil Collectors. The article describes the search for allanite (Ce) at the Combi e Lanza hut and the finds of Alpine minerals at the Chriegalppass and Passo di Cornera, and on the steep flanks of the Helsenhorn and Gischihorn, on the border between Binntal nature park and the Alpe Veglia and Alpe Devero nature parks. The special print edition (D, F, I) is on sale at the park office and costs CHF 5. Online-Shop.