Although the minerals are not always that easy to find, the stones can be found and studied on any walk. We invite you to come and discover the Binntal's geology and stones.

Geological theme trail between Fäld and the mineral quarry

Having been somewhat neglected over the years, the geological theme trail was fully renovated in 2016. Leading along the little road from Restaurant Imfäld to the Lengenbach mineral quarry, it presents the main types of rock found in the Binntal at 11 observations posts. The trail is 1.25 km long with an altitude difference of 150 m, and takes about 30 minutes to walk. At the Lengenbach quarry at the end of the trail, visitors can have a go at cracking stones themselves.

The information boards are written (in German) to be accessible to the general public, avoiding specialist geological jargon. Each has just a small paragraph aimed at experts, and a summary of the information in English and Italian. Visitors can also have fun trying out the serpentinite lithophone and soundholes, and admire stones in detail under a magnifying glass.

Flyer on the geological theme trail and Lengenbach quarry (French) 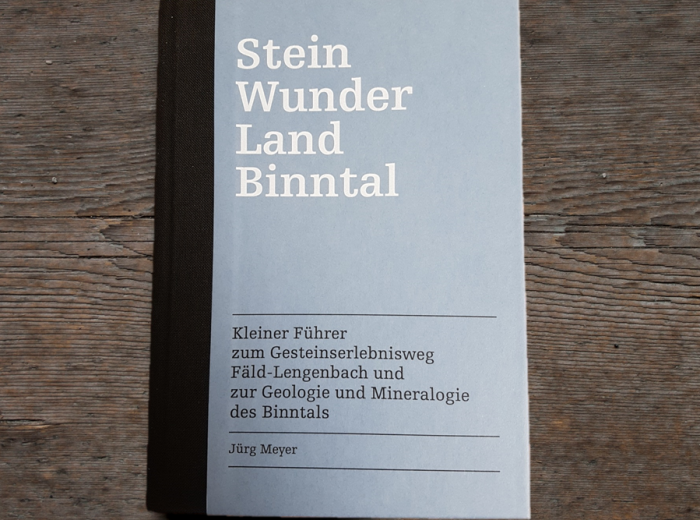 As well as writing the texts for the theme trail, geologist Dr Jürg Meyer has also written a conveniently sized guide to supplement the trail information boards. The book provides an introduction to the Binntal's geological formation and chapters with exciting stories about the stones and minerals that can be found in the valley. There are, for example, explanations of the magical mineral grottoes, how ore was once mined, how stone can change form and of the uniqueness of the mineral wealth found at Lengenbach. The short guide (in German) can be ordered from our online shop.

Fun for all the family: Mineral prospector’s rucksack and magazine 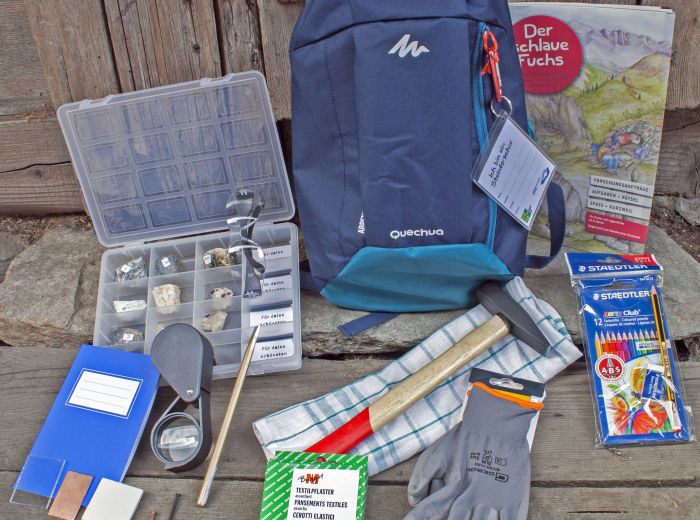 The mineral prospector's rucksack for budding geologists contains a magnifying glass, a hammer and other useful tools for examining stones and minerals in the Binntal. It also contains a box of six minerals and stones from the valley and a 52-page magazine in German entitled Der schaue Fuchs (The Sly Fox). The rucksack is on sale at the tourist offices in Binn and Ernen or in our online shop at a price of CHF 59.

The landscape of the Binntal valley is shaped by its geology and rocks. The course of the valley marks a geological boundary zone: the different mountain forms to the north and south of the valley reflect the completely different rocks in these areas. 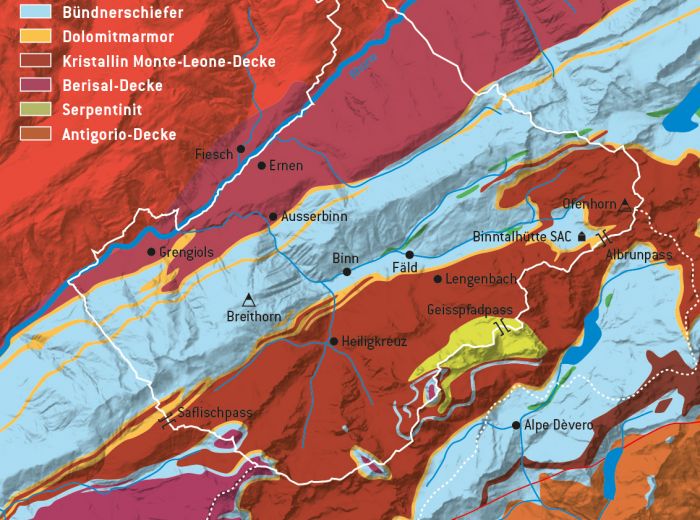 To the north, gentle mountain forms with brown slate-like rock predominate, largely covered by pastures and alpine grass. The area is formed of large, fairly uniform masses of Bündnerschiefer (Bündner slate). At the border to the southern side of the valley, layers of white rock are embedded in the slate, creating a particularly striking effect in the landscape. This is the Binntal white dolomite marble, famous for its mineralizations containing a unique variety of rare minerals.

The mountains on the southern side of the valley are steeper, with many rock faces, patches of coarse debris and large rocks left behind by rockslides. The rocks – gneiss and slate – are harder and lighter in colour. Yet another different type of rock runs from the Schwarzhorn to the Rothorn at the Geisspfad lake. When freshly broken it is green or black in colour, and forms a pink-brown crust when exposed and weathered. This is known as Geisspfad serpentinite.

Both rock zones belong to the area formed when a huge sheet of rock was sheared off its original base during the formation of the Alps and pushed over many kilometres onto the rocks to the north, forming a so-called nappe. Here it is known as the Monte-Leone nappe. When it formed, the rocks buckled to form a huge, horizontal fold; the Binntal lies in the front bend of this fold.

All these processes took place at great depths of 30-35 km, and at temperatures of 550-600 ºC. The great pressure and high temperatures changed the nature of the rock; the result is known as metamorphic rock. As the Alps rose and the rocks gradually came to the surface, they were broken many times, creating cracks and fissures in which all the minerals for which the valley is famous could crystallize.