Binntal nature park and its fauna

The Binn valley has a fantastically diverse wildlife. This is the only place in Switzerland where many of the animal species present are found, or where they are most commonly found.

Because the valley sides are so steep, the land has never been intensively used by man. The extremely dry and rock slopes on the sun-exposed side of the valley are in sharp contrast to the wooded, damp slopes on the shaded side. Put in simple geological terms, the southern slopes are predominantly composed of alkaline rock and the northern slopes of acidic rock. These geological and topographical features and the extremely dry and sunny climate in Valais have led to the emergence of an extraordinarily rich wildlife in Binntal nature park, which rises from the valley floor at around 1000 metres above sea level up to heights where the snow never melts. 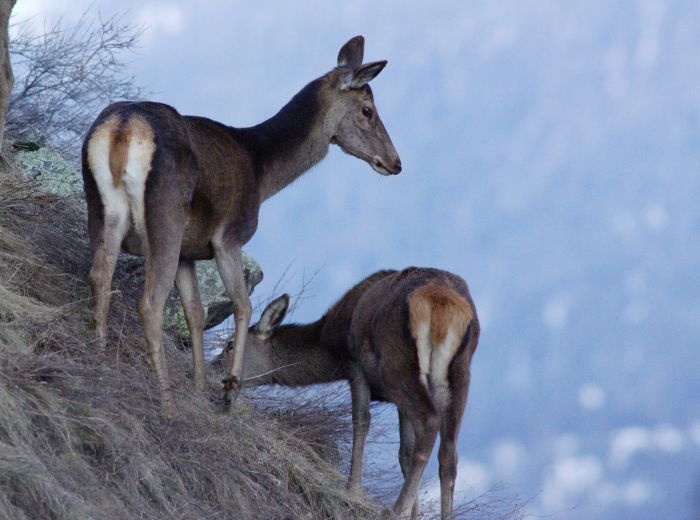 By 1850, red deer (Cervus elaphus) had disappeared from Switzerland. But from 1870 onwards they began to recolonise the country, crossing the border into Graubünden and on into Valais. Stocks recovered well, and for several decades now it has been permitted to hunt red deer again. In several areas of Upper Valais, including Binntal, red deer populations are currently so high that they threaten the regeneration of the protection forest, and so special hunting is permitted to keep numbers down to an acceptable level. The chances of meeting one of these majestic wild animals on a hike are therefore quite high. 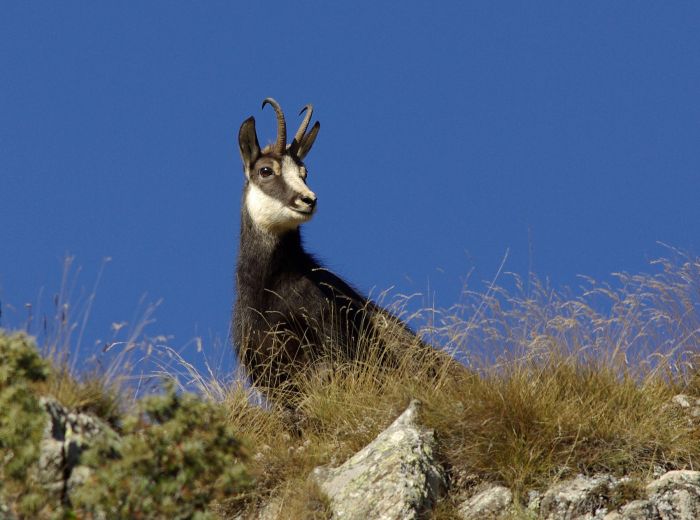 The Latin for 'chamois' (Rupicapra rupicapra) can be translated as 'rock goat', making it a very appropriate name. Distantly related to the domestic goat, these mountain-dwellers have excellent climbing skills, and seek out the steepest and most inaccessible rock slopes to protect them from predators, in particular when they have young. Females and males live separately for most of the year, only coming together during the mating season in November/December, when the males join the groups of females, over whom they fight ferociously. Both female and male chamois have horns, which they preserve their whole lives. 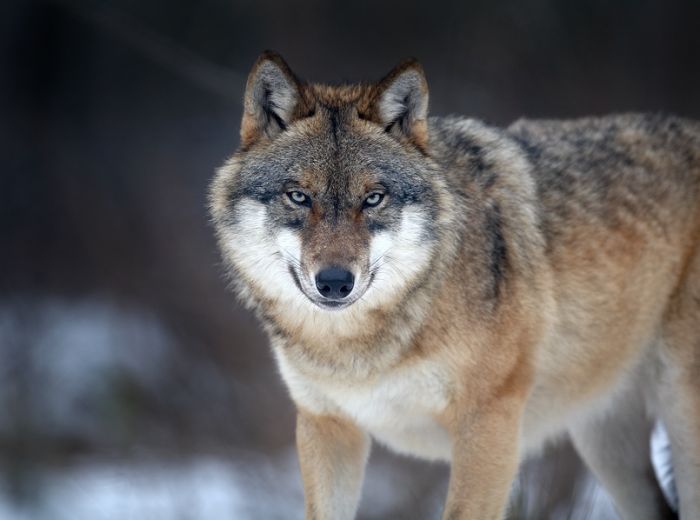 Wolves (Canis lupus) live in family groups with a clear social structure. A pack of wolves comprises the male and female and their young (pups and young animals 1-2 years old). Older offspring have to leave the pack and find their own territory, often hundreds of kilometres away. The last wolf was killed in Upper Valais in 1947, and no further wolves were sighted in the canton for almost fifty years. But from 1994 onwards, wolves were spotted on the border to Italy, where the species has been protected since 1977. And since then, the wolf has gradually and naturally been recolonizing its former habitat. Wolves are rare in Binntal, but they come back time and again. 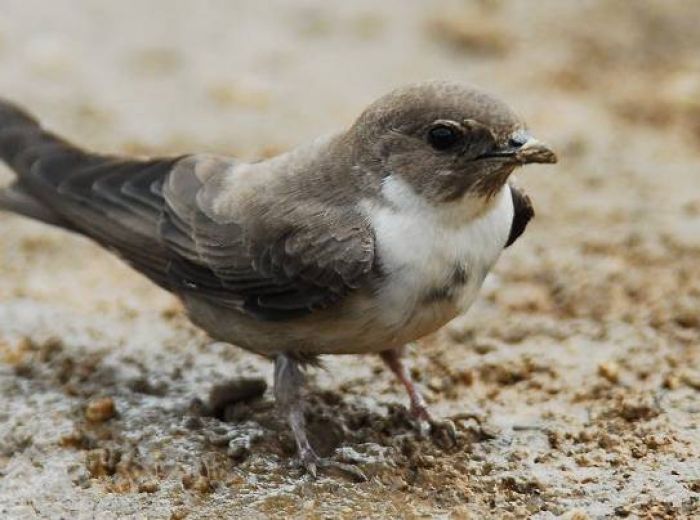 The crag martin (Ptyonoprogne rupestris) is seen very frequently in Binntal nature park. It used only to be found in the Mediterranean, but in recent decades its habitat has spread further north, and now it is found as far afield as the canton of Jura and Lower Austria. It roosts and nests in crevices in rugged rockfaces. In recent years it has also increasingly been found nesting in built-up areas, constructing its bowl-shaped mud nest on ledges on buildings and under roofs. In the hamlet of Heiligkreuz, as in other villages in the park, it is worth looking up under roofs and gables to see if you can spot a crag martin's nest. 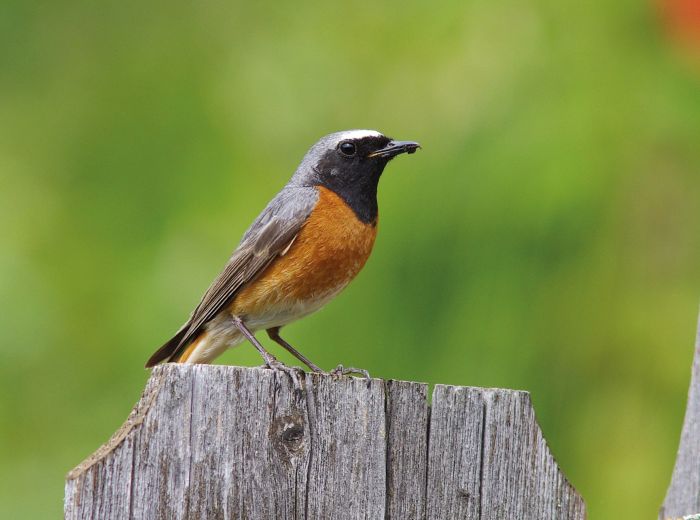 The common redstart (Phoenicurus phoenicurus) is one of our most colourful songbirds. It is easily identifiable by its red tail. Its white forehead distinguishes it from the black redstart, which is similar but has a more monochrome black-grey plumage. The common redstart's habitat has shrunk considerably since the 1960s owing to more intensive agricultural methods. In many places, you will only hear individual males singing plaintively. In Binntal nature park, however, the species can be observed quite frequently. Here it is mainly found in villages and hamlets, as it builds its nest in the niches and hollows of the old Valaisan houses and granaries. 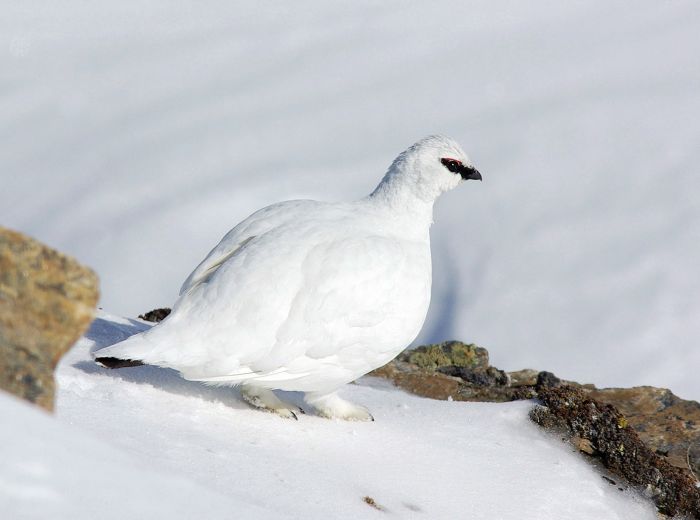 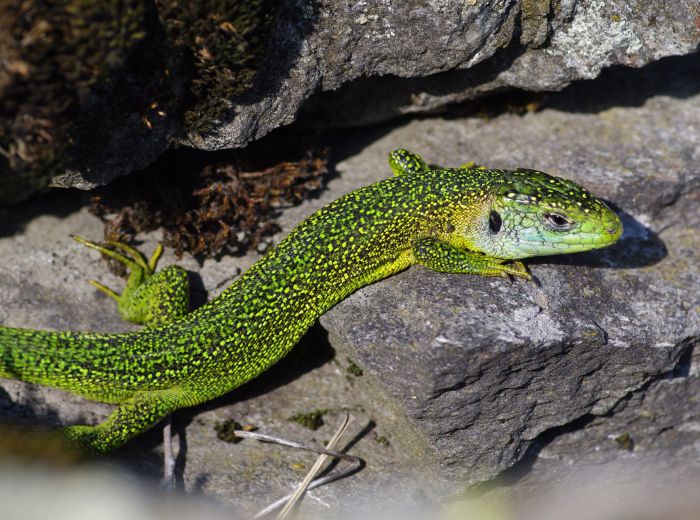 In Switzerland, the green lizard (Lacerta bilineata) is found exclusively in warm climate of the south (Geneva, Valais, Ticino and Graubünden). With a body length of more than 30 cm, it is one of the largest native lizard species. In the local dialect it is called 'Grienig', or 'green one', because of its emerald green colour. However, only the males are so splendidly colourful, displaying their bright blue throats as they fight with other males over territory during the mating season in spring. The females are more retiring, and so are less conspicuously brownish-olive-green in colour. 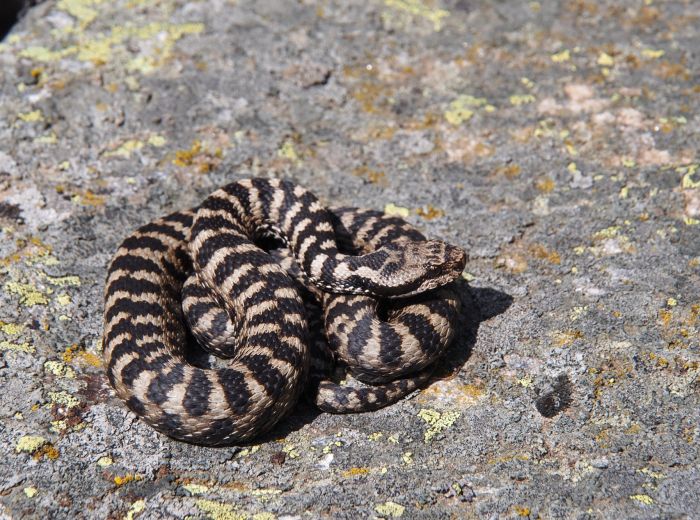 In Switzerland, the aspic viper (Vipera aspis) mainly occurs in the Alps, the Alpine foothills and the Jura. Binntal is a hotspot for this species of snake, with several areas which still have very strong populations. After having spent the winter in a dormant state, aspic vipers are all the more active in spring, warming themselves in the sun as the mating season begins. In late summer, the females give birth to live young (without laying eggs). Vipers are usually very shy and flee when a person approaches them, so you are unlikely to encounter one, and even less likely to be bitten by one. 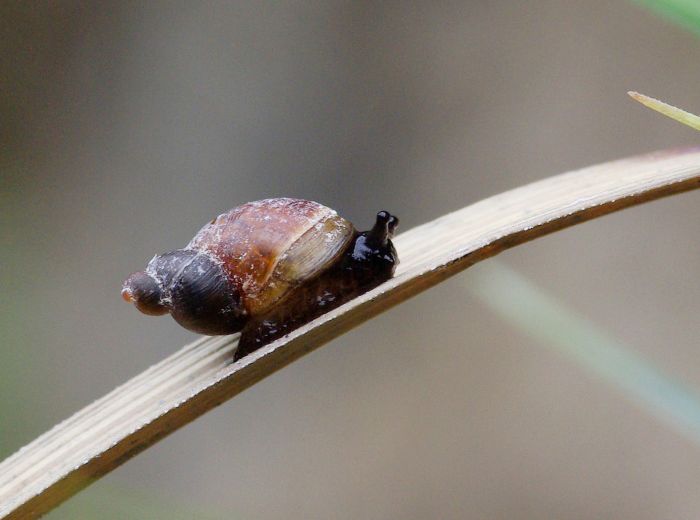 The amber snail (Oxyloma sarsii) is one of the rarest snail species in Europe. In Switzerland it is mainly found in the Engadine and in Valais. It is highly endangered in all parts of the country. In Valais it has as yet only been found in Twingi Gorge in Binntal, and is therefore considered a very special member of the fauna in the landscape park. It takes a certain amount of luck and a good eye to find this rare species, which is barely a centimetre in diameter, tends not to be found in great numbers in one place, and perfectly camouflages its tower-shaped house with dirt particles. The reddish-brown, amber-like colour is only revealed when these are removed. 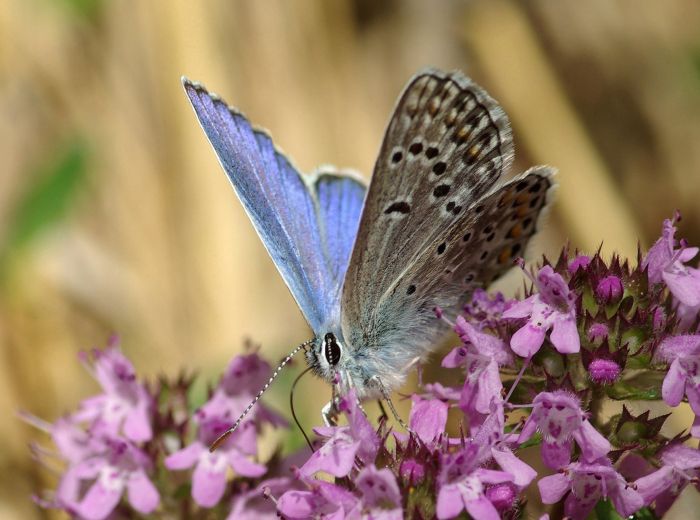 In Switzerland, the highly endangered Escher's blue butterfly (Polyommatus escheri) is only found in Graubünden and in Valais, where it is most abundant. Switzerland bears considerable responsibility with regard to this butterfly species, as these sites are also important internationally. The Escher's blue caterpillar lives almost exclusively on the papilionaceous plant Astragalus monspessulanus. In Binntal, the butterfly colonizes open pine forests and dry meadows, where the caterpillars find food. The delightful blue of the male's wings are not a pigment but instead the result of light being broken up and reflected off the surface. 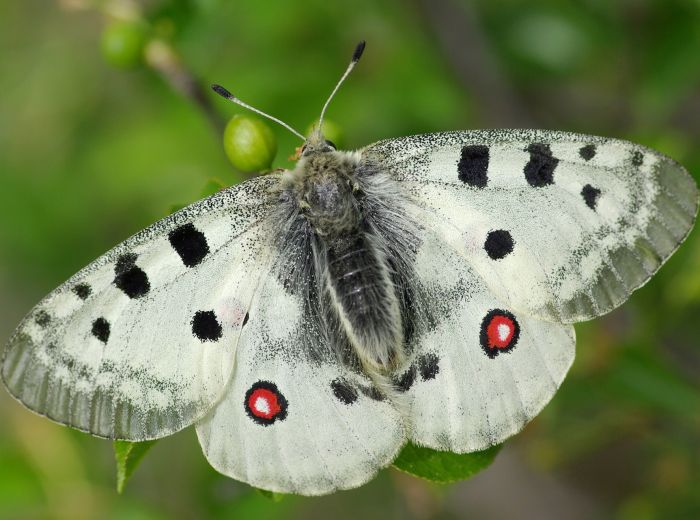 The Apollo (Parnassius apollo) is a butterfly of the family Papilionidae. The largest and most beautiful native Swiss butterflies belong to this family. While it is severely endangered or has disappeared entirely from other European countries, the Apollo can be frequently observed in Binntal nature park, on arid slopes throughout the region. The vibrant, eye-like red splashes of colour on the white wing are designed to deter predators. The Apollo's mating behaviour is also unusual: after mating, the male deposits a gelatinous secretion into the female's genital tract which hardens and forms a plug, thus preventing others from mating with her. 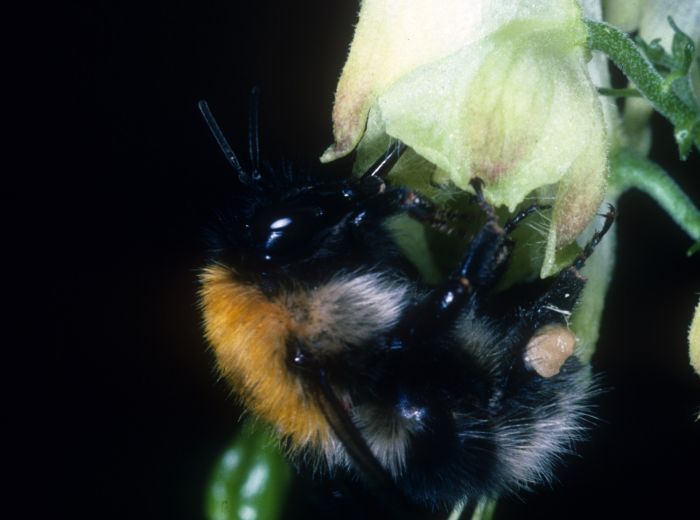 The oligolectic bumblebee (Bombus gerstaeckeri) can be easily identified, even by amateurs, due to its characteristic colouring (brown-yellow breast, white abdomen tip) and the fact that this species collects pollen and nectar exclusively from the monkshood flower, unlike other bumblebee species, which feed on a range of different flowers. With a proboscis 2.5 cm long, almost as long as its body, it is the only bumblebee species that can reach nectar in the deep throat of the monkshood flower. The species has been found in very few places in Binntal nature park, despite intense searching. Due to its rarity, the populations of this species are periodically surveyed and monitored in park. 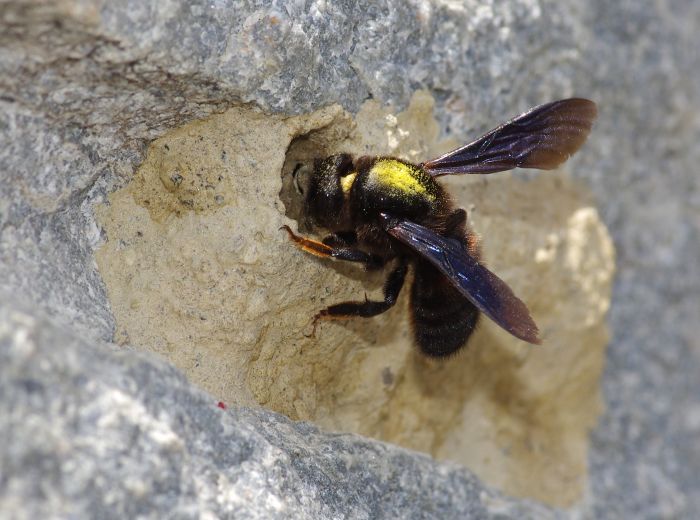 The black mud bee (Megachile parietina), which looks rather like a bumblebee owing to its size and black colouring, is in fact a solitary bee and so does not live in colonies like the honey bee or bumblebee. A lone female uses loam and small stones ('masonry') to build rock-hard nests in depressions and cavities in stones and rocks. In each she places between five and ten eggs, providing each with a mass of pollen from the sainfoin flower (Onobrychis sp.), to be eaten by the larvae when they hatch. In good weather, this takes her two to three days for each egg.
This very rare species is spotted only rarely in the park, and measures are being taken to preserve the population. 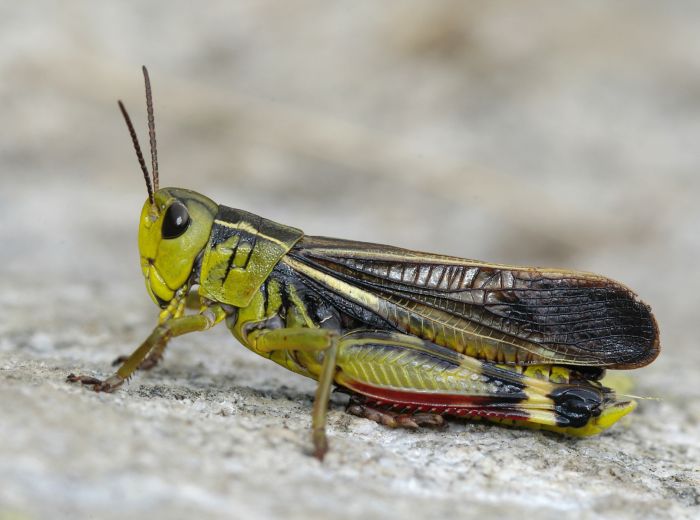 The large-banded grasshopper (Arcyptera fusca) is one of the biggest and most colourful native Swiss grasshoppers. The species is unmistakable due to its imposing body size and yellow-black striped hind legs with bright red tibiae, making it easily identifiable, even for amateurs. August is peak season for the grasshopper: whole mountain pastures buzz with the sound of males rubbing their hind legs against the edge of their wings (stridulating) in order to attract females. In Switzerland, about two thirds of the population of the large banded grasshopper is found in the canton of Valais, and so the canton bears considerable responsibility for their protection. 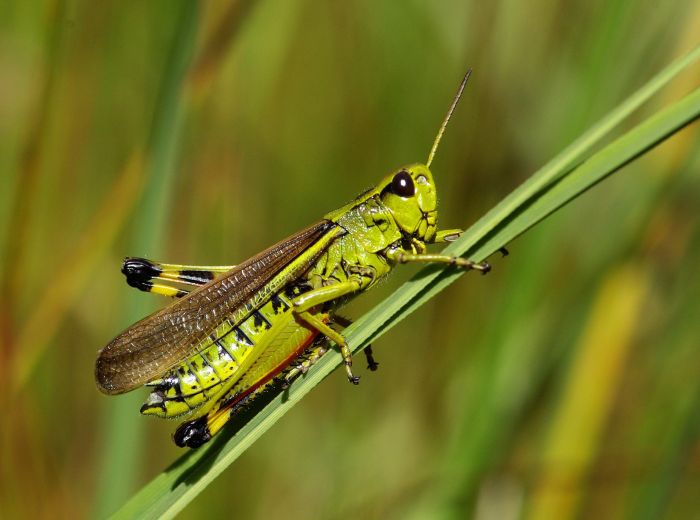