The 20 chapels dotted around Binntal nature park are testimony to religious life in the region. Some, such as the Chapel of the Holy Family (Kapelle der heiligen Familie) in Mühlebach, make their majestic mark on the entire landscape, while others, such as the Maria Hilf forest chapel in Ernerwald, are hidden away where only a few are privy to their Baroque beauty.

These vestiges of popular religiosity emerged in the 17th and 18th centuries in villages and hamlets, forests and remote valleys. This was not only the time of the Counter-Reformation, but also a time of political stability and economic prosperity in the area which is now Binntal nature park. In the mountain farming society of that time, Catholicism was not limited to churchgoing on Sundays and holidays; it permeated people's whole lives. They were therefore eager to give religious meaning to the places in which they lived. Churches, chapels, wayside shrines and crosses provided a connection to the divine.

In contrast to the High Middle Ages, when great long-distance pilgrimages were made to Rome, Jerusalem and Santiago de Compostela, in the Baroque period the local area also became a place of pilgrimage. This stemmed from the desire to turn it into a place of worship. Two chapels in particular still play a special role in the region as pilgrimage sites: the Maria Hilf forest chapel and the Heiligkreuz pilgrimage chapel.

In the 19th century the local mountain farmers turned the Maria zum Schnee chapel into a cheese cellar. The chapel, which lies 2425 metres above sea level, was extensively renovated just a few years ago. 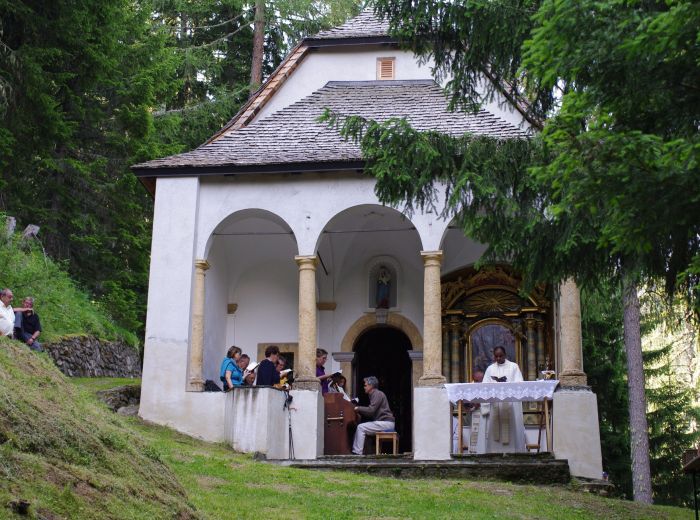 Each year on 2 July a ceremony is held in the Maria Hilf forest chapel, situated on the steep slopes of the Ernerwald. Built in 1693, the pilgrimage site still plays an important role as a place of prayer for the local population. Since 1860 the inhabitants of the Fieschertal have maintained the tradition of holding a 'glacier procession' to the Ernerwald on the feast day of Saint Ignatius (31 July). Until 2010 they did so with the supplication that the dangerously advancing tongue of the Aletsch Glacier might retreat. In 2010 permission to change this supplication was granted by Pope Benedict XVI, and the people now process with the hope that the glacier might grow again. 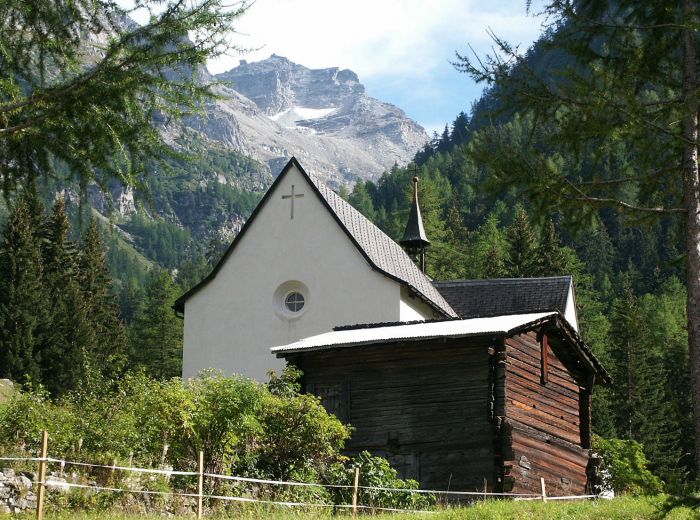 The Heiligkreuz pilgrimage chapel in the Lengtal valley is considered one of the most important pilgrimage sites in the Upper Valais. Legend has it that one morning a crusader who had been in Turkish captivity found himself at the site of the chapel freed of his chains. The present building dates from the end of the 17th century. In an effort to give architectural expression to the patronage of the Holy Cross, the transept form, hitherto unknown in this country, was selected, giving the chapel the shape of a cross. The chapel became even more popular as a pilgrimage site after 1741, when an alleged fragment of the Holy Cross was given to the chapel by the superior of the Capuchin hospice in Ernen. The fragment is still kept in a carved tabernacle. 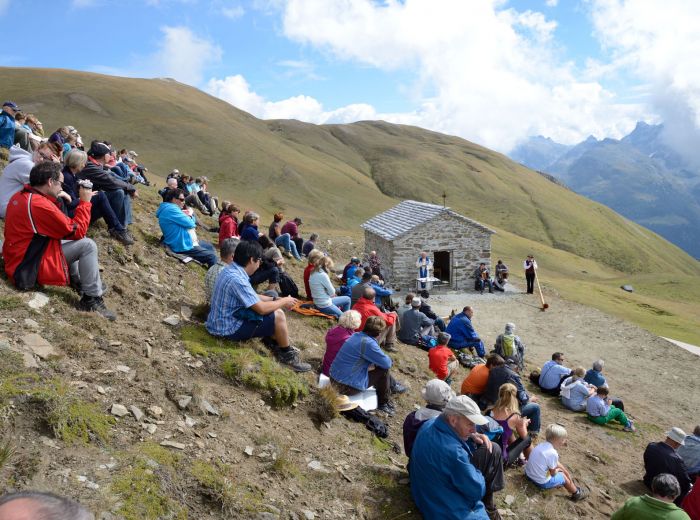 The Maria zum Schnee chapel, a simple building of quarry stone masonry built in 1662, is the highest situated religious building in Binntal nature park. From the middle of the 19th century until well into the 20th, the alpine cooperative used the building as a cheese cellar. The chapel was renovated between 2008 and 2011. None of the chapel's original furnishings had survived; a wooden sculpture by the sculptor Erwin Friedrich Baumann was donated to the nature park for the altar niche, and for the windowless north wall, Leipzig artist Michael Dietze painted a triptych in oil depicting the legend of the origin of the Roman basilica Santa Maria Maggiore.